Scientists discover that appending a ruthenium complex to protein-binding drug molecules can increase their potency. 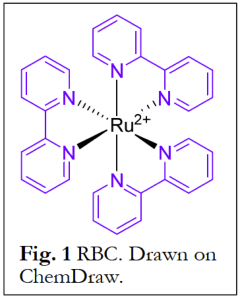 In medicine, an ideal drug is both potent and selective. It achieves the desired biological effect (i.e. suppression of symptoms) in a small dosage and with minimal side effects. Improving the potency of a drug candidate while maintaining its selectivity is an extremely challenging and time-consuming task. In response to this problem in drug optimization, a group of researchers have proposed an elegant and expeditious solution. They recommend attaching a “fire hose” to the drug that can obliterate its target protein with much greater potency than can the drug achieve on its own (Nat. Chem. Biol., DOI: 10.1038/nchembio.333).

The biological fire hose comes in the form of an octahedral ruthenium bypyridyl complex (RBC) containing three 2,2-bipyridine ligands (Fig. 1). In the presence of oxygen and light, an RBC like the one shown in Fig. 1 can excite an oxygen molecule from its low-energy ground state to an energized state. The excited oxygen molecule, also called the singlet oxygen, is highly reactive and can inactivate proteins by modifying its various functional groups. The RBC is analogous to the hose, which releases singlet oxygen as its high-energy flame. The researchers realized they could append an RBC to a known drug to increase its potency by relying on the singlet oxygen to further inactivate the target protein.

In an article published in Nature Chemical Biology,[1] Lee and his colleagues demonstrate the enhanced potency of RBC-drug conjugates using GU40C as a model drug. GU40C is a small molecule that binds and inhibits VEGFR2, a key player in the formation of new blood vessels known as angiogenesis. Angiogenesis is often deregulated in tumor cells, and molecules that inhibit this process comprise a promising class of anti-cancer drugs. While GU40C exhibits high selectivity for VEGFR2, its potency is moderate at best with its half-maximal inhibitory concentration (IC50) at 49 μM.

In order to test whether attaching an RBC to GU40C would increase its potency, Lee’s team created an RBCGU40C conjugate (RuGU40C, Fig. 2) by joining the two components using click chemistry. A critical intrinsic property of the RBC is that it requires visible light as fuel. Its dependence on light for singlet oxygen generation provided the researchers with a convenient handle for turning on the RBC at their will.

The GU40C and RuGU40C displayed similar affinity for VEGFR2 when the RBC in RuGU40C remained inactive in the dark. However, when RuGU40C was illuminated, the activity of VEGFR2 diminished significantly. The IC50 of RuGU40C fell from 49 μM to 59 nM, representing a more than 800-fold increase in potency. The researchers hypothesized that the singlet oxygen species generated from the RuGU40C was largely responsible for the elevated inhibitory activity, while the GU40C merely served as a guide directing the RBC to VEGFR2 (Fig. 3).

Although the RBC-drug conjugate system has shown great promise for GU40C, it is not without its limitations. While the RBC is a wonderful accessory for drugs like GU40C that are highly selective for their targets, RBC conjugates of drugs with significant off-target binding can lead to exacerbated side effects. The RBC conjugation is ideal for small-molecule inhibitors with high target specificity that need a boost in their potency. This concept of the fire hose is just one of many interesting applications of ruthenium in biomedical research. In fact, ruthenium has become more prominent as the new choice of inorganic element for metal-based cancer drugs, a position that has long been held by platinum. Various properties of the ruthenium metal render its complexes more attractive than platinum for use in cancer treatments.

Please tune in for a more detailed account of the applications of ruthenium complexes in the 21stcentury cancer therapy. 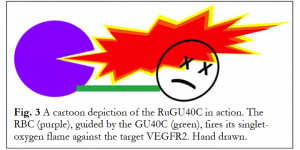