What did early Earth looks like? The first 500 million years of Earth’s history—known as the Hadean Eon—has long been thought to be a period of violent and chaotic volcanism and meteor bombardment that resulted in the formation of a vast magma sea covering the new planet.1 However, the oldest mineral on earth, zircon, is calling into question this picture of early Earth. 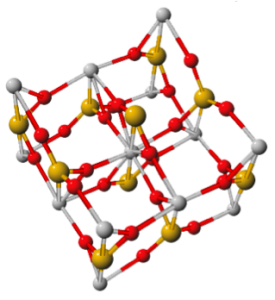 Geologists use the chemical and physical composition of rocks and sediments to infer major geological and climate events in Earth’s history.2 However, the first 500 million years of Earth’s existence, has long been a mystery to geologists.3 Tiny relics of this era are zircon crystals, a common crystalline mineral made up of the elements zirconium, silicon, and oxygen with the chemical formula ZrSiO4 (Fig. 1).4 Zircons, originally formed by the crystallization of magma or metamorphic rocks, are so impervious to chemical and physical weathering that they rarely wear away.4 These minerals have survived many violent geological events that destroy many other types of rocks and minerals. Zircon crystals only grow and regrow in liquid rock or solid rock that is reheated to near its melting point.5 The durability of zircons allows them to crystallize around other silicate minerals and existing zircon crystals as the rock is re-heated during a “second melting” event. Growth of zircons creates pockets of surrounding melts that contain chemical tracers of magma at specific pressures and temperatures that this melting event occurs.1 Zircons thus not only survive these events, but record each event as a ring of new zircon growth (Fig. 2). In the past few decades, cutting edge techniques have been created that allow geologist to extract from zircon rings information about the conditions in which they grew.3

Elements like uranium, hafniun, and titanium often displace Zr4+ ions in Zircon’s crystalline structure.2 The ability of Zircon to incorporate trace radioactive rare earth elements provides chemical tracers than enable the determination of its crystallization age.4 Because zircons crystallize only within a restrictive range of temperatures and pressure, this in turn provides information about the temporal evolution of temperature in a given magmatic system or geologic event. The element uranium has proved most useful in dating zircons.2 Zircons do not readily incorporate lead, but uranium converts to lead through radioactive decay with a half-life of 4.5 billion years. Thus the U:Pb ratio is extremely useful for zircon dating (Fig. 4). A high-resolution device, called a secondary ion mass spectrometer, or ion probe, is used to analyze zircons.5 The probe emits a beam of charged ionic particles that hits zircon, causing the release of uranium and lead ions from the crystal. The instrument then measures the U:Pb ratio, allowing the age to be extracted from the zircon sample.4 The oldest zircons that have been discovered come from rocks in the Jacks Hills of central Australia. These remarkably old rocks have been dated using the U-Pb dating method to be at least 4.375 billion years old, indicating they were formed during the Hadean Eon.3 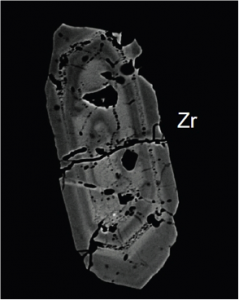 Another zircon impurity, titanium, has recently been used to extract information from these Jacks Hills zircons about the conditions of early Earth. Ti4+, a tetravalent ion, replaces Zr4+ in crystalline zircon in a temperature-dependent mechanism.1 A group of researchers led by E. Bruce Watson, a professor at the Rensselaer Polytechnic Institute (RPI) in Troy, New York, has recently constructed a “titanium thermometer” to measure the temperature dependence of titanium uptake by zircons. Watson has accomplished this by recreating conditions of early earth in the laboratory, manufacturing zircons in the presence of titanium, and measuring the amount of titanium that enters the crystals structure.1 This “titatium thermometer” has been used to determine the temperature at which the Jacks Hills zircons formed. Watson found, surprisingly, that most of these Hadean zircons formed in a restricted temperatures range around 680 ± 20 degrees Celsius. Although this seems extremely hot, it is actually significantly cooler than previous predictions of the Hadean Eon.1

The zircons not only suggest that early Earth wasn’t quite the boiling ocean of magma that it was thought to be, but that it was even cool enough that solid continents had formed, that erosion of these continents was occurring, sediments were forming, and, most significantly, that Earth has liquid water on its surface.3 This finding has revolutionized the way geologists think about early earth. This picture of a much cooler and wetter Hadean Earth permits the picture of an early Earth that is potentially much more hospitable to life. Zircons have thus suggested the likelihood that life began to evolve far earlier in the planet’s history than scientists originally thought.