An estimate of 56 million people die each year, 14.3% of those deaths are of cancer-diagnosed patients.[1] Cancer treatments are a big priority in the medical field for obvious reasons, and as our technology improves so do our chances of fighting back against cancer. One of the more recent methods of cancer therapy is radioembolization, a method that combines the use of radiotherapy and embolization. Embolization is a therapeutic process where in a small mass (solid, liquid or gas) is injected into the blood stream designed to stop blood and nutrient flow in blood vessels.[3] Radioembolization uses microspheres of 20-30 μm in diameter to deliver radioactive materials directly to the tumor of concern.[8]

Different types of microspheres have been developed, but the most commonly used type is yttrium aluminosilicate glass (YAS) microspheres, which are synthesized from yttrium oxide, aluminum oxide, and silicon oxide. Yttrium plays an important role due to its radioactive properties. Yttrium becomes radioactive when the 89Y isotope (atoms with the same number of protons but different number of neutrons) is shot at with neutrons and turns into the radioactive β-emitter 90Y.[2] Radioactive substances are important for radioembolization; however, there is a concern with microsphere durability, where durability is defined as the microsphere’s ability to minimize how much 90Y leaks out, as hydration levels increase. An increase in hydration results in an increase of hydroxyl (-OH) molecules.

Synthesizing microspheres that are chemically durable enough to withstand breaking down and releasing uncontrollable amounts of radioactive 90Y in the presence of water is optimal for several reasons. The most important reason being that since 90Y is radioactive, if 90Y leaked into the body the radiation would no longer be isolated to just the tumor of concern but would be exposed to healthy neighbouring tissues, thus causing more harm than help. To understand the impact of hydration on the durability of microspheres, where durability is defined as the microsphere’s ability to minimize how much 90Y leaks out, YAS microspheres with varying hydration percentages were synthesized and tested.

Yttrium, aluminum, and silicon have different bonding properties. Aluminum and silicon have access to open p-orbitals, while yttrium has access to d-orbitals. Due to the geometry of each orbital, d-orbitals are able to hold more electrons than p-orbitals, and so yttrium has the ability to bond to more atoms than either aluminum or silicon. As yttrium binds to more atoms, the bond distance between the yttrium atom and bound atom increases in attempt to alleviate any steric clash, as shown in Figure 1.

As Figure 1 shows, an increase in ligands (bound atoms) results in an increase of bond lengths. The spheres around each compound represent the molecule’s coordination sphere, which can also be used to emphasize yttrium’s ability to make more bonds with the free hydroxyl groups in solution than either aluminum or silicon. 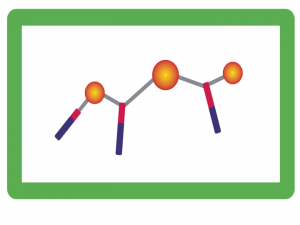 Aggregation occurs when molecules get too large or there is too much electron repulsion in a solution causing the particles to come together to form clusters, as shown in Figure 2, and fall out of the solution.

This is a big concern since the leaked 90Y molecules can cause great harm to neighbouring tissues because of its radioactive properties. Clustering behavior can be quantified using the clustering ratio, RAB, where R is the shortest possible distance between a metal and its ligands, and A and B are the two atoms in question. A larger R-value means a stronger bond between molecule A and B, which means the will for A to bond with its surroundings over B are slim. It so happens as the hydroxyl content increases, so does the R-value for yttrium-hydroxyl complexes.[4] This means the overall cluster strength increases with the increase of hydroxyl content. Strong clusters want to aggregate to reduce the entropic consequences of staying inside the solution. As such, as hydroxyl content increases, the chances of yttrium leaking from the microsphere also increase.